Odisha-born Guruji Dr Chandrabhanu Satpathy recently addressed parliamentarians at House of Commons in the United Kingdom, becoming the first Odia to be extended such privilege.

In view of his immense contribution in the fields of Indian culture, philosophy, literature, and support to humanitarian activities in India and abroad, Dr Satpathy has been presented with the ‘Global Humanitarian Award’ by the UK Parliament on November 15, 2017.
​
At the special event organized at the Parliament to felicitate Dr Chandrabhanu Satpathy, a talk on – ‘Indian spirituality and culture – Relevance in the contemporary world’ was delivered by him. In his speech, Dr Satpathy mentioned that Indians should be proud to retain their culture when living in other countries like the UK. They should spread the role of India in spreading the spiritual literature like Vedas, yoga, pranayama, and meditation. They should speak about the cultural heritage of India when appreciating the cultures of other nations. Dr Satpathy extolled the teachings of Shirdi Sai and urged people to follow His teachings to have a better tomorrow.
​
Dr Chandrabhanu Satpathy gifted to the Library of British Parliament a complete set of ‘Guru Bhagavat’, 5 volumes in English language, originally written in Odia language, is like an encyclopedia on the holy Guru tradition of India.
​
Welcoming Dr Satpathy, Mr Virendra Sharma, Member of Parliament, United Kingdom, said “It’s a great occasion that we have the greatest scholar, spiritual thinker, to deliver his lecture here” and “as the Parliament and the community member, it’s a great honour and privilege to have Dr Satpathy Ji in the Parliament.” Commenting specifically in the context of serving people, Mr Sharma exhorted “Dr Satpathy Ji, I look forward to receiving you in the Parliament at another time so that more people from public life can listen to you, so that they can go back to people, to guide them and assist them in their lives.”
​
The event was attended by an eclectic group of people from all walks of life, based in the United Kingdom and other countries like Germany, India, including politicians, lawyers, bankers, journalists, artists and the industrial representatives.

ALSO READ: An inspiring journey of Odisha boy from Orphanage to Bollywood 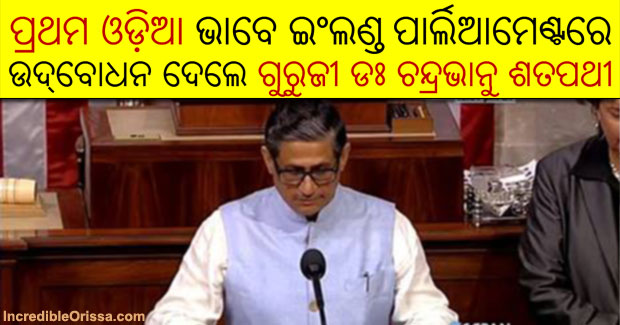