Chinmay won the ATP point at the India F15 Futures Tournament in Madurai last week by beating Bhavesh Gour (world rank 1,588) of India 1-6,6-3,6-2. Earlier, he beat Garvit Batra in the first round of the qualifiers and Gagan Sharma in the second round of qualifiers.

This one ATP point will bring him in the world ranking around 1700-1800 which makes him the 1st person from Odisha to be in the ATP Ranking where Novak Djokovic stands as No 1 and Roger Federer stands as No 2.

The 23-year-old with a national rank of 40 attributes his success to his parents P.K. Pradhan and Jyotsnamai Nayak and coach Santosh Kumar Mallik.

ALSO READ: Do you know that Mindtree co-founder is an Odia from Bolangir

He was the first player from the state to reach the finals of All India Tennis Association (AITA) Tournament in 2012 and went on to become the first Odia to win in the singles’ category in the next edition of the meet. 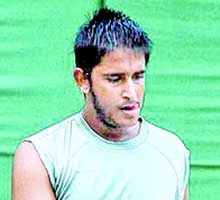 Now, Chinmay Pradhan has added another feather to his cap of firsts.