Chinmayee Bhuyan, who had caught chain snatchers and fought with them in September last year, has bagged a special police job with the Cuttack-Bhubaneswar Twin City Commissionerate of Police.

The city police on Tuesday appointed Chinmayee, who completed her graduation this year, as Special Police Officer (SPO) on the occasion of 9th Raising Day of the Commissionerate Police held at the OSAP 7th Battalion Ground in Bhubaneswar.

Accepting the offer letter with a promise to protect the distressed women, a seemingly-happy Chinmayee, said: “I’ll work as a special police officer appointed me today and will try to teach self-defence to the girls in a bid to take fear out of them.”

Earlier, she was then awarded by Bhubaneswar Municipal Corporation (BMC) Mayor Ananta Narayan Jena for her guts to take on the goons.

It may be recalled here that, Chinmayee was on her way back home at 9.30 pm on September 25 last year when three bike-borne miscreants attacked her near Utkal Karate School in Unit 9 area here.

The assailants snatched her mobile phone and gold jewellery while she was speaking over mobile phone. She chased the miscreants for almost three kilometers till Unit II area and intercepted the trio followed by a bloody fight.

The lone girl dashed her scooter with the snatchers’ bike owing to which they fell down. She took on the criminals and forced them to retreat leaving their bike on the spot. WATCH: Odisha girl slapped a man with chappal in public for misbehaving 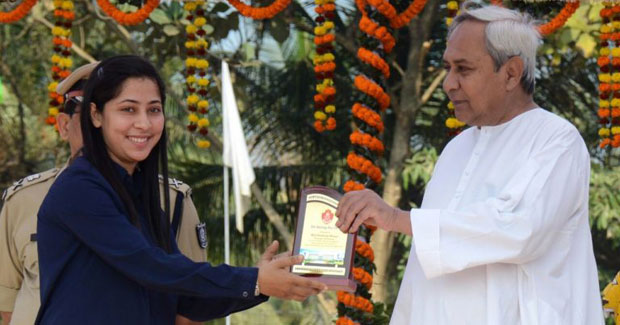