Chitalagi Amavasya or Chitou Amavasya is being celebrated in the holy town Puri today. It is a festival dedicated to Lord Jagannath, the presiding deity of Odisha.

It is one such festival which falls on the new-moon day of the sravana (August). On this day, in the temple of Jagannath, the deity bears a golden mark (chita) on the forehead. A special variety of rice-cake known as Chitou Pitha is given to the deity as food-offering. This variety is also prepared in every household of the Odias of the coastal districts.

In rural areas this is more or less observed as an agricultural festival. On this occasion the farmers worship the paddy-fields. After a purificatory bath in the morning they go to their respective paddy-fields with cake, flowers, milk etc and pray the fields to yield a good crop.

Chitalagi or Chitou Amavasya is celebrated throughout the State in every Odia household. 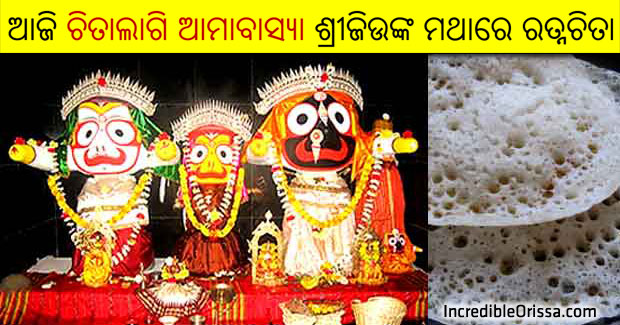