Odisha-based stand-up comedy group Bhubaneswar Komedians has released a beautiful video, Come To Odisha, which is inspired by Alisha Chinai’s popular music video ‘Made In India’ that ruled music charts for a decade for its peppy tune.

The trilingual lyrics written by Akash Baghar and Samar Pratap Nayak in Hindi, English and Odia, beckons tourists to visit this coastal state of India while taking pride in the spectacular waterfalls, wildlife sanctuaries and the ever-delicious cuisines.

While showcasing Odisha’s vast coastline and its pristine beaches, the song says these can make you cancel your next trip to Goa!

This video also includes a humourous take on the heroic tale of Biju Patnaik rescuing the Indonesian President and the Rasogola war with West Bengal. People on the streets have been roped in to lip-sync the song, which was a Herculean task for the makers as many refused to feature in the video.

The Bhubaneswar Komedians team worked for almost a week to launch this project, which is now beginning to gain prominence on social media platforms. 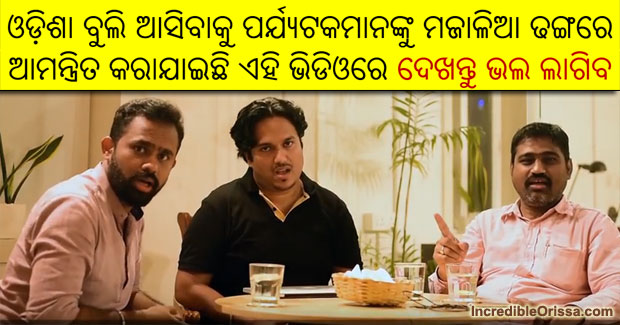