Watch this comedy video where Sarathi Baba and his adopted son Satyam were interrogated together by Crime Branch officials.

Did you know how Satyam Roul, son of Sarathi Baba nabbed by crime branch from Mumbai?

This incident was also shown in this video. 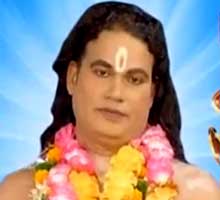 A team of Crime Branch sleuths, after a week-long search nabbed Satyam by tracking the mobile phones of his so-called girlfriend and some of his close associates.

It is episode 8 of Focus Odisha News Room Tamsha program.