An Odisha-based miniature artist, L Eshwar Rao, has carved the ICC Cricket World Cup trophy on a pencil tip using tamarind seeds as a tribute to the Indian team.

The World Cup is scheduled to be played in England and Wales from May 30 to July 14. India will take on South Africa in their opening match of the tournament on June 5.

“I thought of making this world cup trophy a bit different, so I made the trophy using tamarind seeds. I collected the tamarind seeds and crafted them accordingly to make the World Cup trophy. I colored the seeds and gave the trophy a proper shape,” Mr. Rao told ANI on Tuesday.

“Making the World Cup trophy is difficult as all the three stumps should be visible and the ball needs to be at the top of the stumps. It took me two days to make the trophy,” he added.

Mr. Rao, who hails from Jatni village, also used the opportunity to extend good wishes to the Indian team. “I wish the Indian team all the best for the upcoming World Cup and I specially made the trophy for the Virat Kohli-led team,” he said. 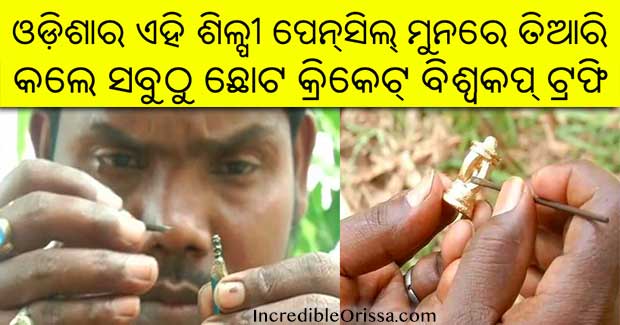