Durga Puja ended peacefully with immersion of idols of the goddess and side deities yesterday.

In Bhubaneswar, total 169 puja committees participated in the Visarjan procession. The idols were immersed in four artificial ponds – two near Kuakhai river, one each at Bhargavi and Daya rivers – created by the Bhubaneswar Municipal Corporation.

The Cuttack Municipal Corporation had created two artificial ponds near Kathajodi river and one at Mahanadi river for the idol immersion. 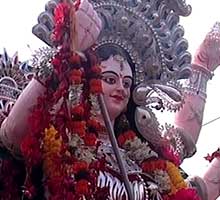 Over two lakh people lined up on both sides of the streets this evening to bid adieu to Goddess Durga and watch the colourful tableaux that formed part of the immersion ceremony in the twin cities.