It is the first dining facility at Biju Patnaik International Airport with a sitting area.

“When we thought of opening a food court at the airport, Biju’s name and his legacy came to our mind. The Kalinga Airlines, founded by Biju, had 15 Dakotas,” said director of the food court Debasish Patnaik.

Entering the restaurant, passengers can see a model of Dakota aircraft with Kalinga written on it. Painted in blue, the model aims to further enhance the theme. The 20ftX12ft model of the aircraft is made of reinforced aluminium foil.

Pictures of various models of Dakotas, owned by the former chief minister, hang on the walls of the food court. Beautifully framed, these black-and-white pictures remind one of the adventurous life of Biju babu.

The Dakota food court is open to even non-flyers. It can seat 50 persons and has been designed on a fast-food concept.

Plans are also being made to add a lounge at one corner serving beer and wine. In future, 150 more seats will be added to the food court, said sources.

From chole bhature to chilli chicken and from noodles to dosa and sambar, the restaurant serves it all. A number of combo meals are also on the menu. There will be special menus for breakfast, lunch and dinner. 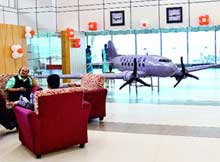 Various Odia delicacies, especially sweet dishes such as Chhena Poda, will be on the offer at the Dakota food court and passengers can also buy packaged sweets. This will help in increasing the visibility of Odia cuisine.