The Daru (Neem tree with divine signs) for carving of the new idol of Devi Subhadra has been identified at Adhanga in Biridi block of Jagatsinghpur district in Odisha. The daru is located in the premises of lord Nilakantheswar Temple in Adhanga.

After identifying all the desired characteristics required to be present in the neem tree, the leader or ‘Dalapati’ of the Banajaga team gave the written confirmation to the Sri Jagannath Temple Adminstration.

This is the second daru identified in the district after Lord Balabhadra’s daru was identified in front of Maa Sarala shrine at Kanakpur.

Jagatsinghpur collector Satya Mallick said, “It’s a great pleasure for us that the second daru – that of Maa Subhadra – has been identified in Biridi. We are very happy that the Daitapatis have selected the second daru in our district and have informed the SJTA accordingly. We will immediately put up barricades to protect the daru. Construction of Yagna griha and other arrangements will be expedited. Traffic control will obviously be a big challenge for us here as this is located amid farmland. We will immediately start working on it from now. It will be done the same way it was done at Kanakpur where Lord Balabhadra’s daru has been identified.” 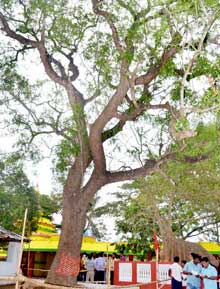 Meanwhile, Lord Sudarshan’s daru has entered Koilibaikuntha through the Uttara Dwara of the Shree Mandir after the sagadi halted for the night at Alam Chandi temple at Atharnala on the outskirts of Puri.