Nabakalebara Daru (Neem tree) for Lord Balabhadra identified near the temple of Goddess Sarala at Jhankada in Odisha’s Jagatsinghpur district.

Soon after the announcement, people of nearby areas thronged the place to offer worship and get a glimpse of the neem tree from which the idol of lord Balabhadra will be carved out.

Six days after the identification of daru for Lord Sudarshan on the outskirts of Bhubaneswar, the daru for Lord Balabhadra is announced today. 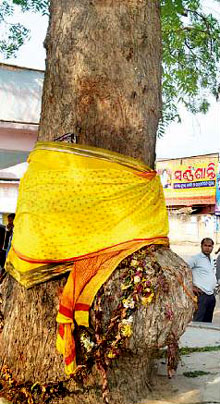 The Banajaga dalapati informed the SJTA chief administrator Suresh Chandra Mohapatra after examining the symptoms of the daru for Lord Balabhadra and consulting with the Banajaga daitapatis.

The Jagatsinghpur district administration has started work for construction of Sabarapalli for the Banajaga yatris and yajna mandap. Barricading work has started so that the devotees can have the smooth darshan of the daru.