Dash Benhur is immensely popular among readers of all ages. He has been writing for many years now and has more than 100 books to his credit including short stories, poems, essays and features out of which, about 73 books are only for children.

61-year old Prof Dash, a noted Gandhian scholar, has been honoured with numerous awards including the ‘Odisha Sahitya Akademi’ and ‘Odisha Bigyan Academy’ Awards. He retired as the Principal of SCS College, Puri and lives in Bhubaneswar.

He is currently the editor of ‘Pilanka Sambad’, a popular tabloid for children published by the Eastern Media Limited.

The selection was made by a three-member jury in Odia language comprising Archana Nayak, Sangamitra Mishra and Santanu Acharya. He will be honoured with a plaque and Rs 50,000 at a special function in Bangalore on November 14. 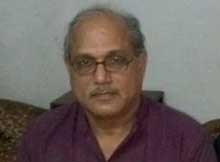 The Kendra Sahitya Akademi announced the awards in Guwahati yesterday.