One of the most exciting aspects of Odia cricketer Debashish Mohanty’s bowling was his fluid bowling action. It was so eye-catching that it was used as the official action of the 1999 Cricket World Cup graphical logo.

Since the 1996 World Cup logo featured a batsman, the logo designers decided on a bowler this time around. Indian bowler Debashish Mohanty was used as the official inspiration for the design. His tall and lanky frame coupled with a fast-paced bowling action caught the eye of ICC higher ups.

The logo designers studied his bowling run up, graphically reconstructing the end of his ball throwing action with the help of stylish and disparate brush strokes. The multicolored brushstrokes represented the diversity of the world cup, with 12 teams from all across the globe participating.

The logo design was universally applauded for its simple yet highly stylized approach to the game of cricket.

Recently Virender Sehwag acknowledged Debashish Mohanty’s contribution to the cricketing world on his 40th birthday and tweeted a message with the logo.

The forgotten bowler of the Indian team was famous for his unusual bowling action. He played in two tests and 45 One Day Internationals from 1997 to 2001. In the 1999 Cricket World Cup, he was the second highest Indian wicket-taker after Javagal Srinath.

WATCH: Odisha MLA seeks sexual favours from a girl in exchange of job for father 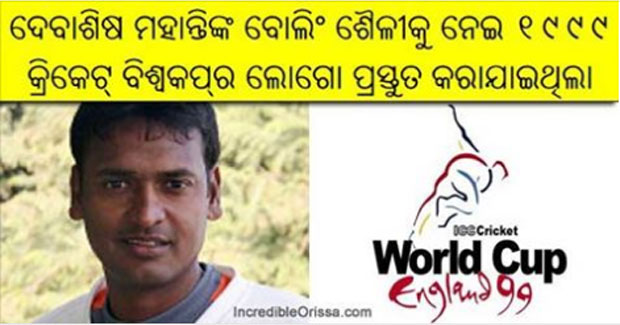