Devotees defied the queue system (Dhadi Darshan) on the first day of its implementation for entry at the Jagannath Temple in Puri today.

In the wee hours today, when the temple gate was thrown open for public, devotees including women entered the Srimanidr en masse without obeying the Dhadi Darshan.

Some activists of the Shree Jagannath Sena and local women uprooted the barricades put up at the temple. They alleged when there was not much crowd why the queue system has been implemented.

A scuffle also resulted between the devotees and policemen at the spot as devotees entered into the Srimandir in large groups without obeying the Dhadi Darshan system.

However, Puri Collector Jyoti Prakash Das said that the queue system has been implemented on trial basis from today and devotees should have obeyed it. CCTV footage will be examined to find out who were involved in the disruption. Some tried to foil our plans to implement reforms at the temple.

As per the new system called (Dhadi Darshan), devotees will enter the Jagannath temple premises through the Singha Dwara (Lion’s Gate) by forming a queue and move inside through barricades. Men and women have separate barricades for smooth and hassle-free movement. After having darshan of the deities, devotees will exit through the Uttar Dwara (North Gate). 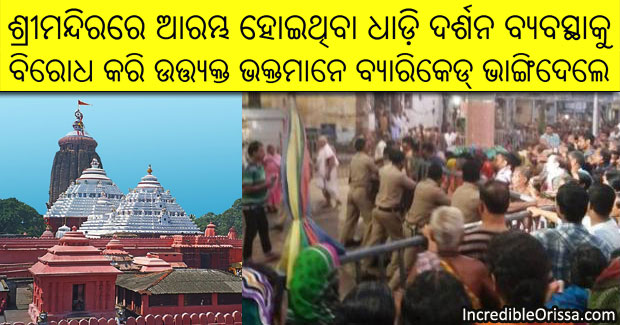