Odisha has a reason to cheer as two BJP leaders from the State have got place in newly constituted Narendra Modi’s Cabinet.

Two MPs from Odisha, one each from the Lok Sabha and the Rajya Sabha, were sworn in as ministers in Prime Minister’s council of ministers at a glittering ceremony on the forecourt of Rashtrapati Bhavan today evening.

BJP’s lone Lok Sabha MP from Odisha’s Sundergarh constituency Jual Oram is named for Cabinet berth while Dharmendra Pradhan who has been elected to Rajya Sabha from Bihar took oath of office and secrecy as a minister of state with independence charge. 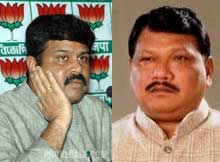 Oram has got Tribal Affairs, the portfolio that he held in the Atal Bihari Vajpayeee while Pradhan will hold independent charge of petroleum and natural gas.