Strange but true. Diesel is now costlier than petrol in Odisha. Notably, it is also for the first time in the country that the diesel prices have overtaken petrol prices.

Diesel happens to be the cheaper than petrol in India, but surprisingly not in Bhubaneswar, the capital city of Odisha. For the first time, diesel prices have overtaken petrol prices. Diesel costs Rs 80.69 per litre while petrol is priced at Rs 80.57 a litre.

Sources said that the deviation in the trend is mainly due to a slow decrease in the prices of diesel in comparison with the petrol prices which was slashed by 83 paisa on Saturday. The price of diesel per litre was slashed by a mere 35 paisa yesterday.

Utkal Petroleum Dealers Association general secretary Sanjay Lath said that this was the first time that the price of diesel surpassed that of petrol in Odisha. Lath said while other states have different VAT rates for petrol and diesel, Odisha charges a uniform 26 per cent VAT on both. He claimed that there has been a decline in sale of diesel in Odisha because of the high prices of the fuel.

The BJD on Sunday took a swipe at the BJP-led government at Centre for the unprecedented hike in diesel price, which has surpassed that of petrol for the first time in Odisha. 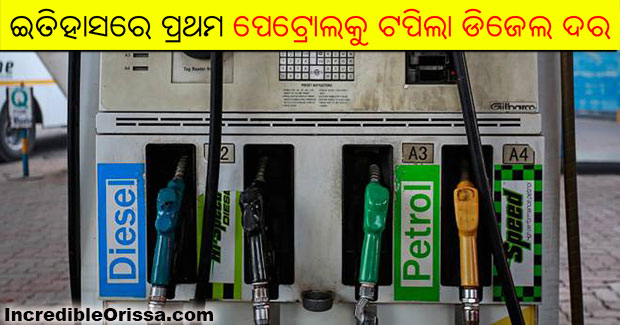