A documentary on sprinter Dutee Chand wins Best Documentary Short award at Queens World Film Festival. This documentary has been screened at various film festivals around the globe and has received critical appreciation from many quarters.

International Olympic Committee’s (IOC) official internet television Olympic Channel has released the second episode of its web series ‘Foul Play’ that features Indian national champion Dutee Chand and her long-drawn legal battle with the International Association of Athletic Federations (IAAF) that had once barred her from competing in official events of IOC.

The 23-minute video showcases Dutee’s struggle against odds to pursue her passion of running and bringing glory for the country. It also chronicles the saga of Indian field and track athlete Santhi Soundarajan from Tamil Nadu who was stripped of her silver medal from the 2006 Asian Games after failing a gender test that declared that she “did not possess characteristics of a woman”.

From her Sports Authority of India (SAI) coach Nagpuri Ramesh who talks about her indomitable spirit to Katrina Karkazis (Senior Research Scholar, Biomedical Ethics) who was an expert witness in her case and admires her positivity and courage to speak up for herself, Dutee is seen talking about her innermost feelings of dejection and humiliation when her image as a woman and an athlete became questionable. “I was told that my career was finished and that no one ever bounces back from this,” said the 22-year-old who is training at Sports Authority of Telangana State in Hyderabad.

India’s fastest woman, Dutee won the landmark legal battle at the Court of Arbitration for Sport (CAS) challenging the verdict of the gender verification test and the rules of IAAF laid down for female athletes who have hyperandrogenism. The rules have now changed for such atheletes who make for a mere one percent in the world. She is currently undergoing training and practising for Tokyo Olympics 2020. 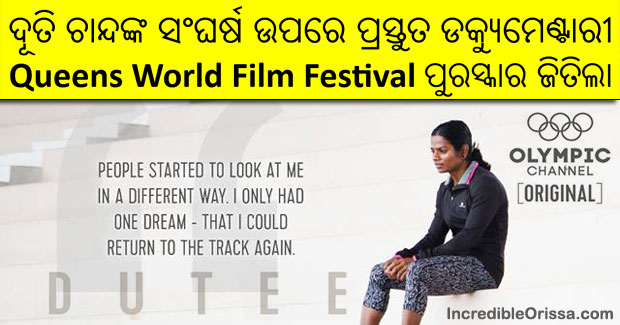