Drone technology for waste management will be implemented for the first time in Odisha.

The Cuttack Municipal Corporation (CMC) is considering a proposal to introduce unmanned aircraft systems, also known as drones, for effective management of solid waste in the city.

It was a research project and the CMC would be the first in the country to adopt the new technology to generate comprehensive data of solid waste generated from various parts of the city.

A team of professors from IIT Kharagpur presented the proposal of using the high-end technology before officials on Thursday. The IIT team is keen on introducing the concept as a pilot project in Cuttack as there are only a handful of high-rise buildings, making it easier for drones to capture images and videos during flight.

Professors of IIT, Kharagpur – Arabinda Kumar Routray, Bhabani Shankar Das, William Mohanty and Subrat Sarkar – participated in the workshop and made an elaborate presentation on the project. They provided details of necessary technical support for the Drone project, the cost of which is estimated at Rs 3 crore.

The drones to be used as part of the proposed project will be programmed to capture images from a height of 800 metres. The images and other data will either be stored in a built-in storage device or transmitted to the ground station.

A CMC official said a decision on the proposal would be taken at the next council meeting. Once it was approved, it would take another year or year and a half to implement it, he added.

The ultramodern machinery Drone, which has been designed under Swachh Bharat Mission of the Central Government, will be implemented for the first time in Odisha. 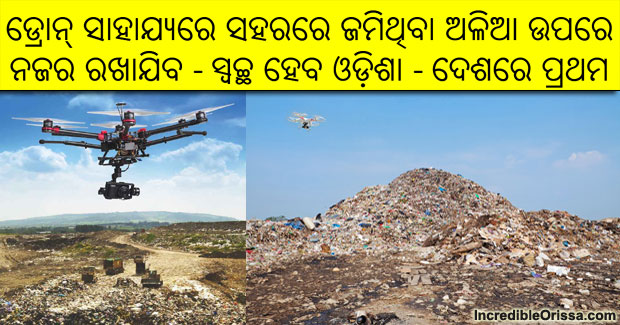