Various accounts exist, which ascribe the origin of Durga Puja in the state of Odisha. Some historical accounts agree on the influence from other regions, although some mythological accounts describe an independent origin.

There’s a flood of articles on the origin of Durga Puja festival in the zamindari culture of Bengal, which sought to appease the East India Company in the 18th century. Not one has any reference to the possible roots in the Gosani Jatra of the Puri temple in Odisha.

According to Markandeya Purana, a King of the Chedi dynasty, Suratha, started the rituals of Durga Puja in 300 BC. The Chedi dynasty ruled in Kalinga (modern Odisha). Durga Puia has different names in different Puranas and Sastras. In Devi Purana and Kalika Purana, it is named as Vijaya Dashami. It is named as Maha Parbana in Devi Mahatmya and Dussehra in Markandeya Purana.

The worship of temporary clay images of Durga has been attributed to the 11th century king, Chodaganga Dev, who also initiated the building of the current Puri Jagannatha temple. At the Puri temple, Mahishasuramardini (Goddess) and Madhava (Krishna) are worshipped together in a secret ritual known as the Gupta Gundicha ceremonies that take place during Navaratri.

Gosani refers to clay images of Durga that, perhaps, originated in Puri. Unlike delicate and stylised images of Durga at Puja Pandals, the Gosanis look earthy, fierce and their gaze is not upon the devotee, but at the buffalo demon. Every Gosani has a Devi Yatra on her body, covered by fine silver filigree work that Odisha is famous for. Around her are intricate and grand torans of silver and gold.

The Gosani jatra has always been a public festival, with each of the Gosanis belonging to a particular neighbourhood (sahi, in Odia), and no particular king. Has it been around since the 11th century AD, as established by Chodaganga Dev? Many Gosanis are said to have been attached to akharas established by Adi Shankaracharya in the 8th century.

Was this practice of worshipping temporary clay images of the sovereign goddess, who bestows sovereignty, later adopted by kings of Odisha, Bengal and Assam, and through the ages, by zamindars who wanted to feel like kings? We can only speculate.

It is said that in the 16th century, when Chaitanya Mahaprabhu visited Kataka (now Cuttack) and met the Gajapati kings who lived in the Barabati fort at Gadagadia ghat of Mahanadi, he established the Durga Puja at Balu Bazar.

A few decades later, during the reign of Akbar, when Todarmal was reorganising the land tax model, a zamindar family known as Ghosh Mahashay from Bengal moved to Rameswarpur village in Bhadrak district of Odisha and the Durga Puja was performed in his house, and continues to be performed. It is the oldest known location where Durga has been continuously worshipped every year for nearly 500 years.

This happened long before the East India Company and the public Sarbojonin Durga Puja of the 18th century. (This article is written by Devdutt Pattanaik) 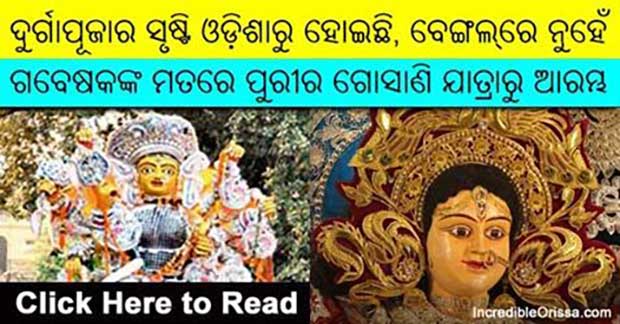