Sprinter Dutee Chand is back with a bang in the circuit, winning a bronze and two silver medals in the first three legs of the Asian Grand Prix in China and Chinese Taipei last week.

The 20-year-old, competing in the international circuit for the first time after the Rio Olympics where she was the first Indian woman to qualify in the 100m, clocked 11.59 to bag bronze in the first-leg and then improved with an 11.57 to clinch a silver in China. Then, she bagged another silver in the Chinese Taipei leg with an 11.52s.

She now targets the qualifying mark (11.26 s) for the World Championships later this year.

“It is always tough to come back to such a competitive circuit after a long, off-season when the demands are naturally very high both in terms of training and setting new standards,” said Dutee.

“It is a wonderful feeling to win three medals in the Asian Grand Prix series and a huge morale-booster too,” said the athlete, training under SAI coach Nagapuri Ramesh at the GMC Balayogi Stadium in Gachibowli. 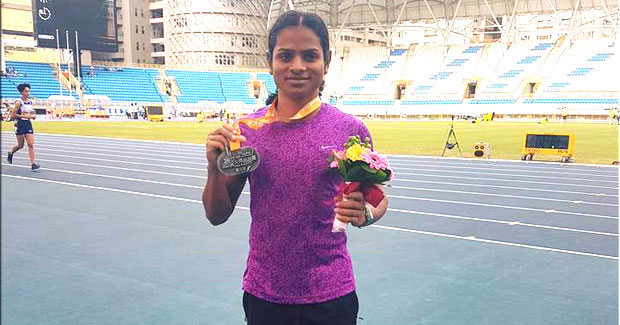