The Odisha government announced a cash award of Rs 1.5 crore for sprinter Dutee Chand, a day after she clinched silver at women’s 100 metre dash at the 18th Asian Games in Indonesia.

India bagged a medal in the 100m women’s category after a gap of 20 years. Last time Odisha’s Rachita Mistry clinched a bronze for India in the event at the Bangkok Asiad in 1998. The Odisha Athletic Association (OAA) secretary Ashirbad Behera declared Rs 50,000 cash award for the athlete after her successful run in Jakarta.

In a major boost to the sportsperson, the cash reward is expected to be a major motivation for the athlete who comes from a very poor family in Odisha’s Jajpur district. In her early days, she had to run barefoot and was inspired to take up athletics after the success of her elder sister Saraswati Chand.

Yesterday after Dutee won the silver, Odisha CM took to Twitter and congratulated her for the achievement. Apart from the CM, union petroleum minister Dharmendra Pradhan and prime minister Narendra Modi also congratulated the athlete on twitter.

Dutee Chand couldn’t participate in the 2014 Asiad in Incheon following her suspension for 18 months by IAAF. She bagged a bronze in the 100m dash at the 22nd Asian Athletics Championships held in her home state last year and was also a part of the Indian 4X100m relay team that won a bronze in the championships.

Dutee recently set a new national record in the women’s 100m event when she clocked 11.29 seconds in the semi-finals at the 58th National Inter-State Senior Athletics Championships and had clinched a gold in the finals with a timing of 11.32 seconds. 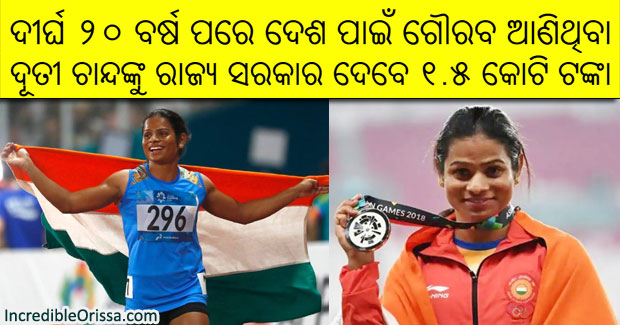