Defying barriers of distance, language, culture and tradition, an England girl found her soulmate in an Odisha boy. The couple tied the knot in a traditional manner and the bride was more than happy to embrace the Odia life.

The marriage between Gyanaranjan Pattnaik and Georgia Elizabeth was held at the former’s residence at Rambha under the police limits in Ganjam district. You can watch the wedding video below.

Gyanaranjan, younger son of Ramani Mohan Patnaik, worked as South Indian International Volunteer. Meanwhile, Georgia, daughter of Richard Michael, was engaged by an NGO in Chennai. The two met in 2012 and hit it off instantly.

Soon, their relationship developed and they began falling for each other. With the consent of their parents, the two first got into a court marriage in 2014 at Puri district court. After two years, they wished to carry their relationship forward and planned their marriage at Gyanaranjan’s village.

The marriage was conducted after Elizabeth readily agreed to marry in the local Hindu tradition. Expressing her affection towards India, she said, “I adore this country and its culture. I and my family are quite happy with the marriage and they are here for the marriage as well.”

The couple is now settled in UK. Both are running a shop to earn their living. However, Georgia and Gyanaranjan have planned to settle in India in future. 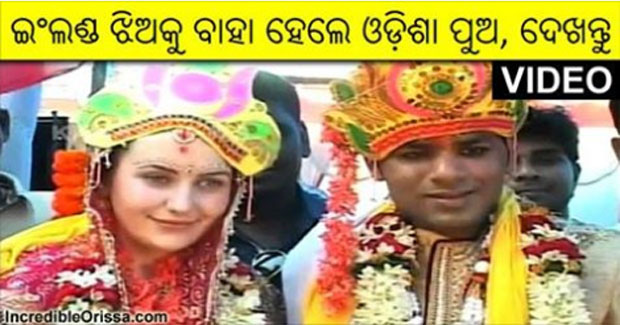