After Prime Minister Narendra Modi’s announcement of demonetization of Rs 500 and Rs 1000 notes, the fake notes of Rs 2000 new notes have been surfaced in the market of Karnataka.

According to the government, the currency was so secure that even the experienced and high-tech counterfeit printing presses in Pakistan could not fake it.

But it was just a matter of time before someone tried to do it, and guess what they did. A couple of Rs 2,000 currency notes were seized in Karnataka’s Chikmagalur on Saturday which turned out to be some crafty fakes.

The notes were seized from a local market after someone gave it to a vegetable seller. Not convinced on its quality, the vegetable seller took it to the police station where it was identified as a fake.

So, how did they pull it off? Apparently it was nothing but a colour photocopy! The edges of the notes appears to be cut using some sharp object like a scissors.

To bring awareness among the people, we have listed the top methods to identify a fake Rs 2,000 note from the real one. Read them carefully.

1. The size is 66 mm × 166 mm.
2. Windowed security thread with inscriptions ‘भारत’, RBI and 2000 on banknotes with colour shift.
3. The colour of the note is magenta.
4. Electrotype (2000) watermarks.
5. Denominational numeral २००० in Devanagari.
6. Mahatma Gandhi portrait.
7. There are geometric patterns aligning with the overall colour scheme, both at the obverse and reverse.
8. Colour of the thread changes from green to blue when the note is tilted.
9. The new Rs 2,000 banknotes in the Mahatma Gandhi (New) Series, bearing the signature of RBI Governor Urjit R Patel.
10. Ashoka Pillar emblem on the right.

11. The year of printing ‘2016’ printed on the reverse of the banknote.
12. The new note has Motif of Mangalayan (Mars mission) on the reverse.
13. Swachh Bharat logo with slogan at the back. 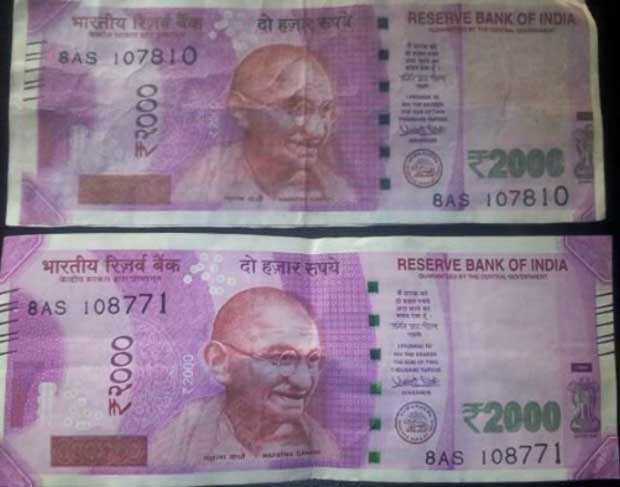 Home > Odia News > Fake notes of new Rs 2000 found in market: How to identify real ones