Although people from all states of India came together to fight the war of Independence, some freedom fighters from Odisha state particularly made a mark and left the British power utterly hopeless, irritated and distressed.

In 1817, Paiks of Khurda and people of some areas of Orissa raised their strong voice against Britishers, which is known as Paik rebellion. The rebellion 1817, according to some scholars is the first war of independence. This became a source of inspiration for nationalist leaders.

This post will cover some famous Odia freedom fighters who took the Raj to task.

Baji Rout is the youngest martyr of India. This 12 yr old boat boy was shot dead by British police when he courageously denied to ferry them across the Brahmani River on the night of 11th October 1938 at Nilakanthapur Ghat, Bhuban, Dhenkanal district.

Baji Rout was the youngest son of a boatman on the Brahmani river. As an active member of the Banar Sena of Prajamandal (Party of People), He had volunteered to keep watch by the river at night. The British Police force ordered him to cross the river by his Boat which he denied. The police force became revengeful and fired Baji Rout along with Laxman Mallik and Fagu Sahoo.

Jayee Rajguru, who was born in 1739 in an eminent scholarly family in Bira Harekrushnapur village, near Puri, was killed by the Britishers in a gruesome manner on December 6, 1806. His legs were tied to two different branches of a banyan tree in Medinipur village and the branches were let off splitting his body into two parts.

Laxman Nayak, an Odia folk-hero of Koraput of southernmost part of Odisha and a cult-figure among its tribals, was born in Tentuliguma village of the Koraput district. Responding to the call of Mahatma Gandhi, Nayak led a procession on August 21, 1942 and demonstrated peacefully in front of Mathili Police Station. The police however fired at the demonstrators indiscriminately, which killed forty and injured more than two hundred people. The administration implicated Nayak in a case of murder and the death sentence was pronounced on him on November 13, 1942. He was hanged on March 29, 1943 in Berhampur Jail.

The famous freedom fighter Dharanidhar Bhuyan was born on May 5, 1864 in a Bhuinya family in a small village called Kusumita of Keonjhar District of Orissa. He fought against slavery for the Kondh, Kohla and Bhuinya communities. Dharanidhar led people against oppression and British dominance. He raised his voice against the Britisher in 1891 when he saw the unlawful activities towards his community. But at last he was arrested by the soldiers of Downson and was imprisoned for 7 years in Cuttack jail. He was released in 1897 and after that a great change was seen in his life. He led the life of a Sanyasi (saint) at Banki near to Puri beach.

Chakhi Khuntia played a very crucial role by fomenting resentment among the Indian soldiers called “Sepoys” and organised a mutiny which subsequently took a violent shape. Khuntia was well known as the Panda of Sepoys or Hajuri Panda (religious guide of Indian soldiers). On account of his involvement in this first freedom struggle, Chakhi Khuntia was arrested many times and kept behind the bars. Chakhi Khuntia spent the last leg of his life at Puri. He was not allowed to go anywhere else. He devoted himself to the literary pursuits and religious rites relating to Lord Jagannath. He breathed his last in 1870 at Puri.

Two spirited youngmen Dibakar Parida and Raghunath Mohanty played a significant role in the Ranapur Rebellion of 1938-39. The fiery words of these leaders awakened the consciousness of the masses. As a result the spirit of revolt spread even to the remotest parts of the country. People of the feudatory states like Dhenkanal, Talcher and Ranapur responded to the call of the leaders and joined the movement. It was the dawn of 4th April 1941 when the young patriots stood on the gallows of Bhagalpur jail.

Rindo Majhi was a freedom fighter who was a leader of the Kandha revolution in Kalahandi region in Orissa against the British in India. In 1853 Lt. Macniell arrested Rindo Majhi and the Kondhas chief was imprisoned in Rasalkanda jail without trial. The fire of revolution grew much and worse among the Kondhas by the arrest of Rindo Majhi. On 10 December the Kondhas attacked the residence of Lt. Macneill at Urladani. But the British had guns and powers. Hundreds of people died. Lt. Macneill escaped narrowly because the Tahasildar of Kandhamal Dinabandhu Pattanaik came and rescued him and his people. The British hanged Rindo Majhi. 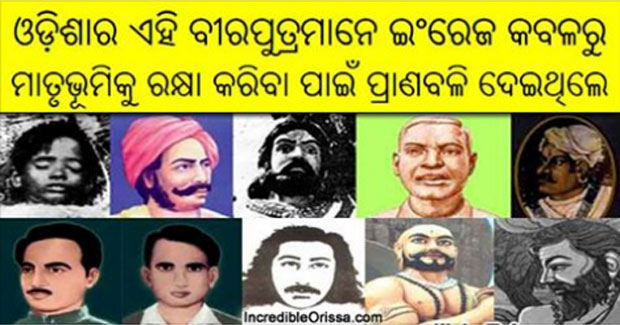