These Ollywood celebrity father-son duos hardly get any time to spend together because of their hectic schedules. On the occasion of Father’s Day on Sunday, some stars shared their views.

Akash Dasnayak had his kitty full of film projects when he decided to follow in his father Mayadhar Nayak’s footsteps and embrace politics. He said – “I learnt love and respect for the downtrodden from him. He has always supported me in all my decisions.”

While for actor Akash, his father is his pillar of strength, for actor Babushan, his dad, former matinee superstar Uttam Mohanty, is a friend too. “I have done my share of wrong things and even then my father stood by me. I share every tiny detail of my life with him. He is not a disciplinarian. He is more of a companion,” he said.

“When I decided to enter the film industry, he told me that he will help me get into the industry, but he won’t help me grow and I must chart my own success route,” Babushan said.

Asked about the significance of the day, Babushan, who was not aware of the exact date of the celebration, said on the day it was important to at least express gratitude to one’s father. 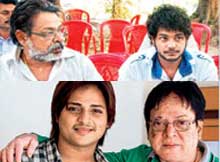 When veteran actor Mihir Das had seen son Amlan’s first film shot, he fondly remembered his. “He was more confident and understood the technology better compared to me,” said senior Das. Amlan finds it humorous that people compare a newbie like him to veteran like his father.

“Whatever I am today is because of Baba. Both of us don’t talk much, but still silently we understand each other perfectly,” said Amlan. (Source – The Telegraph)