Almost 60 years after the Filmfare Awards were first introduced, the coveted honour is coming to East India region now.

The first ‘Vivel Filmfare Awards’ for 2013 will be organised at the Science City auditorium, Kolkata on March 29.

The iconic Black Lady will be given to winners in 21 categories for Bengali films and 4 each for the Oriya and Assamese film industries.

“I am happy that such a national honour is coming to east India. Films from the region will be in the spotlight,” Ollywood superstar Anubhav Mohanty said at the press conference in Bhubaneswar. 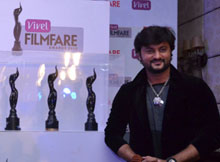 The winners will be chosen from 36 Odia films released in 2013 and given for Best film, director, actor and actress.

The Filmfare Awards were first introduced in 1954, the same year as the National Film Awards.