Madhusmita Patnaik becomes the first Odia woman to be a flight commander in an international airlines.

Hailing from Berhampur, this vivacious lady has seen a lot of highs and lows in her life. But with her sincere efforts of riding high on her merit, Madhusmita Patnaik has now emerged to become the first Odia lady captain of an International airline service.

Madhusmita was one of the three sisters born to a doctor couple. She did her schooling from Sacred Heart Convent, Rayagada and then shifted to Bhubaneswar with her parents.

From very beginning she had a dream to become a pilot. Then she enrolled herself into the elite Odisha Flying Club, but with a lack of aircraft and instructors to her aid, she planned on moving to Texas, US for pursuing her desire.

After two years as an instructor, she finally inched closer to her dream of flying free and moved back to India. Finally she joined the Air Deccan in 2004 as a co-pilot.

Never to look back, she worked in Kingfisher Airlines and joined Go-Air as captain for 5 years before moving to Air Arabia. Now she is a Senior Commander in Air Arabia. 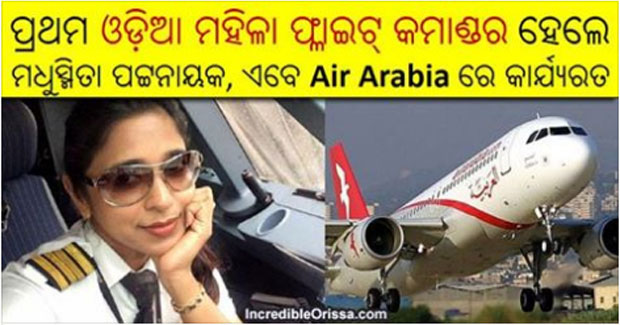