Doctors at AIIMS Bhubaneswar has conducted a rare surgery removing a foetus from a 21-year-old man. The foetus, 8cm long and weighing 250gm, had been growing inside him since his birth.

The surgery, which lasted five hours, was successful, said Tushar Subhadarsan Mishra of the AIIMS department of surgery. He said that such operations had been so rare that they had been conducted only around a hundred times across the world so far.

Medical experts in Bhubaneswar said that “foetus in fetu” is a rare abnormality in which a mass of tissue resembling a fetus forms inside the body of a patient. The mass begins as a normal foetus, but becomes enveloped inside its twin since birth. At other points, it develops in form a tumour and resemble like a foetus.

“The foetus was developed in the boy’s lower abdomen since his birth. It was a critical surgery where we had to take care of the adjacent tissues of his limbs. The boy could have lost his ability to walk permanently if the operation had gone wrong,” said Mishra.

All India Institute of Medical Sciences (AIIMS) Bhubaneswar did not divulge the name of the boy, who hails from Jaleswar in Balasore district of Odisha. He was discharged from the hospital on Thursday after staying there for a fortnight.

ALSO READ: Raahgiri Day in Bhubaneswar to begin from November 27 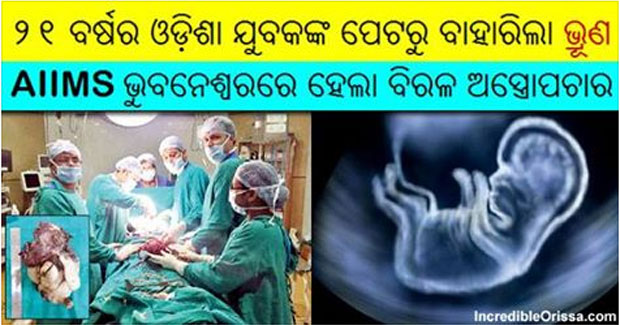