Food on Wheels is a new trend in Bhubaneswar now.

A group of young entrepreneurs have taken street-food business to a whole new level by serving palate-tickling dishes straight out of stylish kitchens mounted on flashy trucks.

The mantra is simple: fast, healthy and delicious! There’s no end to the cuisines you can try, as every food truck experiments with something new! 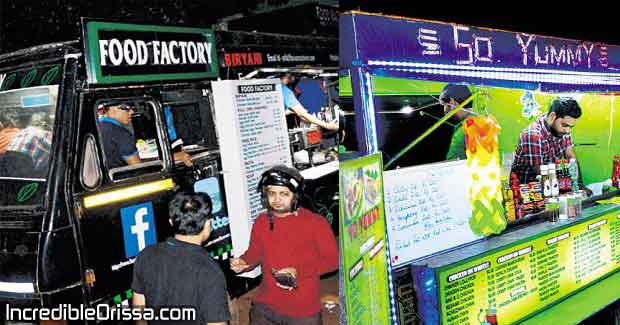 Most food trucks are operating in areas such as Ram Mandir square, Patia square and OUAT square.

There are around 15 food trucks in Bhubaneswar with Food Factory, Qdoba, So Yummy and Adore being the most popular.

On an average, each food truck caters to 300-400 customers a day. The number rises to 1000 on weekends and holidays.

Here’s our list of the top food trucks in Bhubaneswar, which you can add to your list of must-eats!

“One does not need to get into the hassle of acquiring several licences to start a business or bothering about things such as decorating an entire area. The only thing that need to be looked into is serving good food,” says Sumit Routray, who started Food Factory in January.

He also plans to take the food truck culture to cities such as Cuttack and Puri next year.

So Yummy – It specialises in Chinese food made by trained chefs from Calcutta.

“A number of my friends residing outside the country told me about the concept and I liked it. The concept of adding mobility to food business was a method adopted long back by our forefathers, but once style and innovation are added to the idea, it gets better and attractive. My attempt was to revive the tradition in a modern way,” said Sushree Sangita Nanda, a 32-year-old MBA graduate from IIT Kharagpur, who launched So Yummy four months ago.

She is planning to start another franchise of her mobile food van in Patia next year.

“I love their burrito and papadzules. The food they serve is not available anywhere else in the city. Moreover, the kitchen built inside the truck is clean,” said Ananya Mohapatra, a 26-year-old IT professional, who is a regular customer at Qdoba.

Qdoba was born after 27-year-old Arjun Nayak had enough of his corporate job in Mumbai and wanted to do something different.

For 28-year-old BTech graduate Abhijeet Patnaik who started Adore a few months ago, the food truck was a stopgap arrangement till his restaurant took off. But, his key idea has now taken a backseat.

From offering fusion food to Mexican treats, these culinary ventures have a wide range of food on their menus.

Easy concept, small budget are twin reasons for young entrepreneurs to invest in food truck business. Food lovers are happy to get good stuff cooked in hygienic conditions and at affordable rates.