After success of the first two bone marrow transplants (BMTs) at the newly set up BMT unit in SCB Medical College and Hospital, the Odisha Government on Wednesday announced to provide free treatment to all BMT patients for next one year.

Around eight leading pharmaceutical companies – Heteo Oncology, Intas Oncology, Dr Reddy’s Laboratory, Torrent, Aureate Healthcare, Panacea Biotech, EM Care and Terumo Penpol – have come forward to shoulder the burden by provisioning free drugs including the expensive chemotherapy medications and required transplant items for all patients for next one year. The companies have agreed to support 10 patients each.

On April 30, the bone marrow transplant unit became functional at SCB. The unit was inaugurated by health and family welfare minister Damodar Rout on February 26. 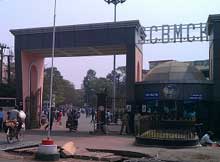 “Similarly, the cost of allogenic bone marrow transplant is around Rs 7 lakh at SCB, while the same transplant would cost Rs 25 lakh to Rs 40 lakh outside,” said head of SCB haematology department R.K. Jena.

The State Government has, in fact, decided to construct an independent BMT (bone marrow transplantation) facility. Land has already been identified and a blueprint for an integrated five-storey building is ready. The departments concerned have been asked to start work soon.