He could not become a doctor himself but now imparts free medical coaching to 20 poor students in Odisha every year.

This year, 14 students from Odisha made it to medical schools thanks to the initiative of Ajay Bahadur Singh, who once sold tea for a living but now imparts free medical education to underprivileged students.

His inspiration? Anand Kumar’s famed Super 30 in Patna, which mentors students from underprivileged sections of the society for entrance into the prestigious Indian Institutes of Technology (IITs).

Recalling the eight-year journey of his Jindagi (Life) campaign, Singh told IANS: “I started the initiative in 2010. Initially, two-three students came for coaching and students started qualifying for medical college in 2012. This year, 14 students have been selected in the medical entrance examination.”

Some 14 underprivileged students of Odisha have cleared the National Eligibility-cum-Entrance Test (NEET), a national-level single entrance test for medical courses, thanks to the initiative by Singh’s Zindagi Foundation.

Singh said he started the initiative as he could not become a doctor due to poverty. “My father was an engineer and he aspired to make me a doctor. But as luck would have it, he had a kidney problem and we have to sell our properties for a kidney transplant. I had to sell tea and other stuff for my family’s sustenance. So, I could not become a doctor,” said Singh, who belongs to Deoghar in Jharkhand but settled in Bhubaneswar in 2005.

Every year, Jindagi provides boarding, lodging and coaching to 20 students free of cost. The Zindagi initiative is now being viewed as a novel initiative not only in Bhubaneswar but in the whole Odisha. 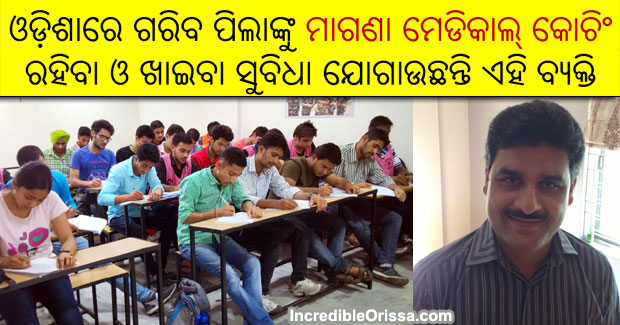