Odia veteran actress Gloria Mohanty passed away on 11 December evening in a local hospital at Cuttack at the age of 83.

Soon after the news of her death spread, well-known Ollywood stars including Anubhav, Kuna Tripathy, Sritam and producers rushed to Mohanty’s residence to have a last glimpse of the departed soul.

Born on June 27, 1932 at Matha Sahi in Tulasipur area of Cuttack city, Gloria Mohanty began her career as an accredited singer of Akashvani Kendra. Later, she left the job and concentrated on acting in the Odia movies.

Gloria had her debut in Odia cinema in 1950 with the path-breaking film ‘Sri Jagannath’ as the leading lady Lalita opposite Gopal Ghosh. It was a huge hit and established her as a leading actress.

Some of the most notable films of her are Tapoi, Ulka, Sakshi Gopinath, Paribara, Kedara Gouri, Tapasya, Janani and Maa. 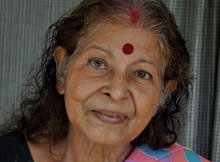 In recognition of her profound contribution to Odia movies, Gloria Mohanty was conferred with the Sangeet Natak Akademi Award and Jayadev Award by the state government in 1992.

May her soul rest in peace!