Go Air, a low-fare airline, has decided to launch 4 daily flights from Bhubaneswar Biju Patnaik domestic airport to New Delhi, Mumbai and Kolkata from the 26th of October this year.

Go Air will be the third scheduled airline after the national carrier Air India and low cost carrier Indigo to commence domestic operations from Biju Patnaik airport which currently handles 15 daily flights (11 of Indigo and four of Air India).

Go Air is an Indian low-cost airline based in Mumbai. It commenced operations in November 2005. It is the aviation foray of the Wadia Group. As of January 2014, it is the fifth largest airline in India by market share. It operates domestic passenger services to 21 cities with over 100 daily flights and approximately 795 weekly flights. 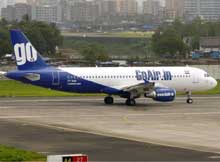 It is going to add Bhubaneswar’s Biju Patnaik International Airport as its 22nd Destination.