Gopal Chandra Praharaj is famously known as the compiler of “Purnachandra Bhashakosha” (first Odia encyclopaedia which was a magnum opus).

The Purnachandra Odia Bhashakosha is a monumental 7 volume work of about 9,500 pages published between 1930 and 1940. It was a result of the vision and dedicated work over nearly three decades of Gopal Chandra Praharaj.

Praharaj not only conceived and compiled the lexicon, but he also raised the finances for its printing by pains-taking collection of public donations, grants and subscriptions. He also supervised the printing and the sales of the published work.

Briefly, the Purnachandra Odia Bhashakosha is an Oriya language lexicon listing some 1,85,000 words and their meanings in four languages – Oriya, English, Hindi and Bengali. In addition, it is replete with quotations from wide ranging classical works illustrating the special usage of various words.

A lawyer by profession, Praharaj wrote several satirical and analytical essays, in magazines such as Utkal Sahitya, Rasachakra, Nababharata, Satya Samachar, on the social, political and cultural issues of contemporary Odisha during early 20th century. 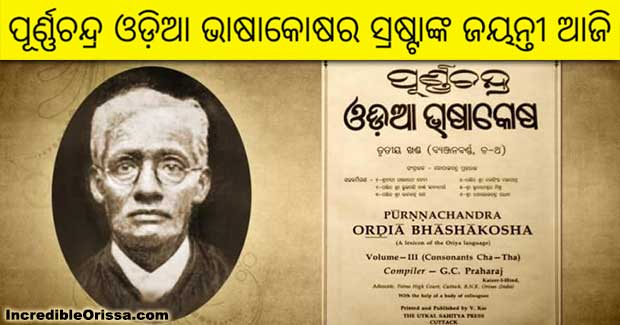