The Assam government has proposed a new legislation to deduct the salary of government employees who failed to take care of their elderly parents. The deducted portion of their pay will then be given to the parents by the State.

It could bring cheer to many neglected elderly and perhaps become a trendsetter social reform. The proposal was mooted in the state budget and the social welfare department is now working towards preparing the necessary draft to bring in the legislation in the current year.

“The intent behind this scheme is to send a strong message in society and inspire our young population to take good care of those gentle pairs of hands which nurtured them and made them what they are today,” said Sarma.

To initiate the process, the government proposed “a legislative cover to such familial responsibilities.” The employees working in the government/government undertakings/state PSUs/employees of companies will be expected to take care of their elderly parents in a desirable manner.

The Telangana government is seriously considering linking the salary of government employees to their taking care of their elderly parents. Government departments have received complaints from elderly parents that their children are neglecting them and not paying for their maintenance.

The government plans to deduct the salary of such employees and pay it to the neglected parents every month, but first it will consult the employees’ unions. The Assam government has recently brought in such legislation, which has inspired the Telangana government.

ALSO READ: Odisha to include sports as compulsory subject in school curriculum 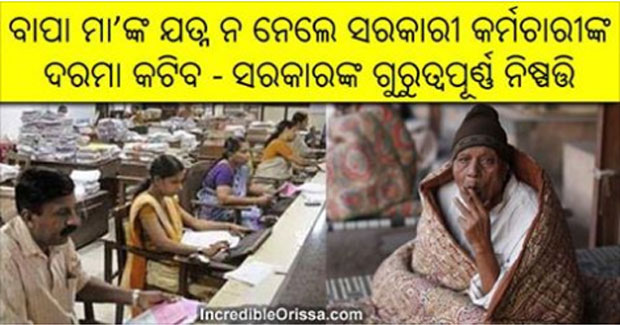