This system – which will be linked to a smartphone application – will not only help commuters know the exact location of the vehicles, but also aid the administration track them in case of a breakdown, accident, crime or other emergency situations.

BPTSL sources said a tender has been floated to hire a private party for installation of the devices. The GPS devices will have a sensor (chip) attached to it so that it transmits the data to the central server with exact location. The GPS will help send location inputs.

The buses would be fitted with GPS, which would tell, in real time, the location as well as the speed of the bus. Bhubaneswar mayor Ananta Narayan Jena said: “Installation of the tracking system is a part of the city bus modernisation plan. The system will help both citizens and administrative officials.”

Sources said in the next phase, there were plans to develop the bus stops, which will get new looks with steel railings, display boards with real-time information on bus timings and more. The services will be managed from a central command control room developed under the smart city project.

The new tracking system will also facilitate the driver to push a panic button in case of an emergency situation and alert the control room. At the other end in the control room, operators can direct buses if they were moving too slow and suggest alternative routes if caught in traffic jams.

BPTSL sources said after successful implementation of the tracker in 100 buses, the facility will be made available in other buses. The city plans to have 500 more buses of different variants. 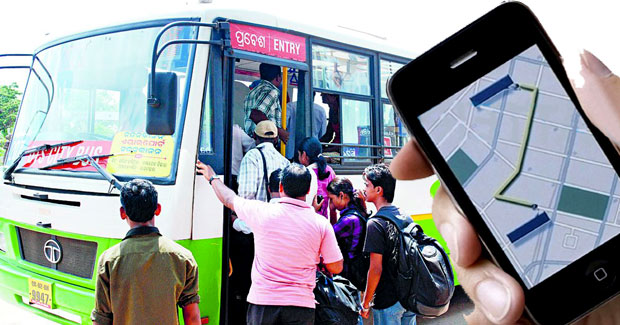