Budhaditya, who had been busy with reality show Sadhaba Bohu on Tarang TV, is all set to make a big screen comeback with this film.

After getting Tarang Cine Award for his negative role in Sangam, the actor is portraying a bad guy’s character again.

“It is basically a love story and I am playing the protagonist. I believe my character of a gunda will be accepted by the audience, as they will see me in a complete new look,” said Buddhaditya, who is happy to have landed this challenging role. 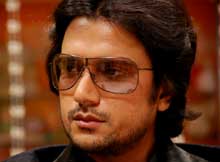 Revolving around a simple, fun-loving guy who turns bad owing to circumstances, the film shows how he often takes law into his own hands to fight the evils of society. “When the director narrated the story, I was really impressed and soon gave my nod,” Buddhaditya Mohanty added.

Scheduled to go on floors towards the last week of March, Gunda odia movie will be shot at various locations in Odisha. Deepak Kumar has scored the music for the film.