Eminent Odia lyricist Gurukrushna Goswami passed away at his Shivajinagar residence in Cuttack. He was 84. According to family sources, Goswami died due to protracted illness. He is survived by wife, two sons and two daughter-in-laws.

Gurukrushna Goswami was a script writer, lyricist and music director and was associated with Odia music industry over six decades. Born in 1934 near Baripada, Goswami has over 1600 folk, devotional and modern songs to his credit.

He made his debut as the lyricist in Ollywood in the film ‘Maa’ released in 1958. The songs in the films including ‘Arundhanti’, ‘Suryamukhi’, ‘Kiye Kahara’, ‘Gapa Helebi Sata’, ‘Jibana Saathi’, ‘Agni Pariksha’, ‘Samaya’, ‘Priyatama’, ‘Ranabhumi’ and ‘Pathara Khasuchi Bada Deulu’ are the most popular lyrics ever in the industry. He had also penned two films — ‘Arundhanti’ and ‘Suryamukhi’.

Some of his melodious songs which are considered evergreen songs in the film industry includes ‘E banara chhai’, ‘Mu je janena kaha bata’ and ‘Abhimani bandhure’.

He was the All India Radio (AIR) approved music director. Entire Ollywood industry was saddened by the demise of the great lyricist.

ALSO READ: 19 Odisha districts to get cooking gas through pipe by 2019 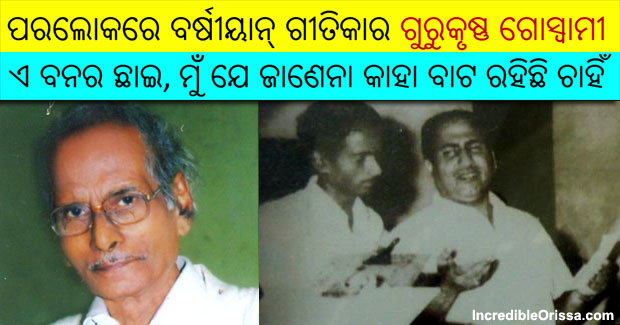