Keonjhar witnessed an unusually heavy hailstorm on Monday turning its landscape snow white and it looked like Kashmir for sometime. From roads, to houses to agricultural fields, the entire area was covered with hailstones.

A 10 square kilometre was engulfed in a vast sheet of whitish layer of hailstones of different sizes and shapes. It depicted panoramic picture of snowfall with the hilly landscapes here wearing the look of hill stations of Jammu & Kashmir and Himachal Pradesh.

“It was just like snowfall as the entire region felt as if covered in white snow during the storm that lasted for nearly half an hour today,” said a local resident.

“The hailstorm lasted for about 25 to 30 minutes and it turned everything into white. I have ever seen the hailstorm of this intensity striking Keonjhar. We have got soothing relief from heat due to hailstorm,” narrated Tapas Rat, a local.

Bringing relief from the scorching heat, the hailstorm also created problems for the farmers as crops in several hectares of land have been damaged. Sources said, the destruction caused by the brunt of the hailstorm left asbestos roofs damaged. 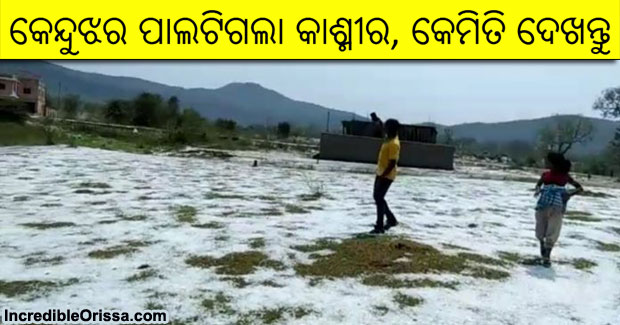