Legendary Odia actor and director Hara Patnaik passed away in a private hospital of Bhubaneswar at 12.40 pm today. He was 56.

Patnaik’s condition had been deteriorating for the last one and a half years during which he spent most of his time in the hospital. The veteran actor, whose blood group was the rare B Negative, needed frequent doses of blood platelets in these one and a half years.

After successfully battling blood cancer, Hara Patnaik, was back in movies with a bang. Om Sai Ram, was his first film since his recovery in 2012 hit the theatres. Later, he acted in Zee Kalinga’s serial Mo Jejemaa.

As a director, he gave several upcoming actors their first break in cinema. Among those who made it big in Ollywood after getting a break under him are stars like Anubhav Mohanty, Babushan Mohanty and Sabyasachi Mishra. 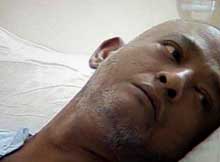 27 Comments
Improve your male potency and fight back the premature ejaculation. With the help of tadalis-reviews.com you will have your healthy sexual life back in no time. Order it with Priligy online and forget about premature ejaculation once and for all.
Copyright © 2022 Incredible Orissa.
error: Content is protected !!