Top comedians of Odisha – Hari and Papu Pom Pom are coming together in upcoming Odia film ‘Aashiq’ in comedy roles.

Director of the movie, Sudhakar Vasanth is doing a positive police officer’s role. Abhijit Majumdar has composed all songs and sang some romantic numbers in this cinema. 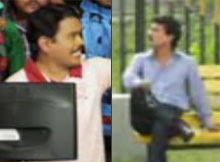