On Deva Snana Purnima, the bathing ceremony of the deities is observed on the Snanabedi. Thereafter, the deities are dressed like Ganesha who bears the head of an elephant (Hati). Lord Jagannath and Balabhadra appear like Ganesha or black and white elephants.

Many centuries ago, a scholar called Ganpati Bhatta paid a visit to the court of the king of Puri. The king invited him to see the Snana Jatra but the scholar declined stating that he refused to worship any god except Ganesha. The king insisted and not wanting to upset the royal patron, the scholar very reluctantly went to see the bathing ceremony. To his astonishment, he was unable to see Krishna; in the place of Krishna was Ganesha. Even Balabhadra had taken the form of Ganesha.

He realized that Jagannath who is Vishnu and Balabhadra who is a form of Shiva, in their compassion, had taken note of his wishes and taken the form of Ganesha. The scholar also realized that the differences between Ganesha and Vishnu and Shiva were all artificial and not divine.

Since that day, during the bathing ceremony of Jagannath, priests place the mask of an elephant on the two brothers. This is the Hati Besa or the elephant attire, when Krishna and Balarama become black and white elephants respectively, each a form of Ganesha. 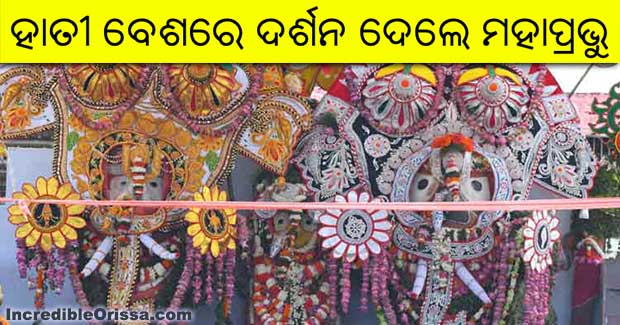