Goddess Lakshmi will break a part of Lord Jagannath’s chariot ‘Nandighosa’ parked in front of Gundicha temple on the auspicious occasion of Hera Panchami in Puri today.

As per rituals, on this day, servitors carry Goddess Lakshmi to the Gundicha Temple on a palanquin in a grand procession. After reaching the temple, the Goddess makes a halt near Nandighosha where she is welcomed with ceremonial ‘Bandapana’. Later, she is taken to Lord Jagannath through the ‘Jaya Bijaya Dwara’ where she receives an ‘agyan mala’ (a garland of consent) taken out from the body of Lord Jagannath.

While returning, she asks her servitor to break a part of the Nandighosa and later returns to the Srimandir through Nakachana gate via Gohiri Sahi route. This ritual is known as Rath Bhanga.

Another interesting fact is also found in ‘Ratha Chakada’ scripture that Hera Panchami was introduced by the King Kapilendra Deb. Earlier, the ritual was performed through chanting. But, the king had conducted the rituals in a grand way in which the Panchu Pandav was also taking part. 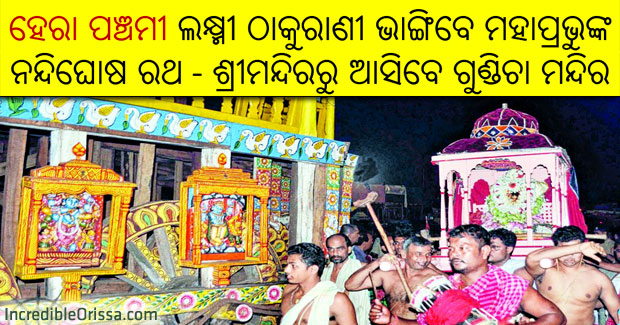