Heat wave-like condition prevailed in many parts of Odisha today with the mercury crossing the 40-degree Celsius mark in at least ten places.

The maximum temperature at Bhawanipatna, the district headquarters town of Kalahandi district, was recorded at 41.2 degrees Celsius, while it was 41.1 degrees at Hirakud in Sambalpur district. 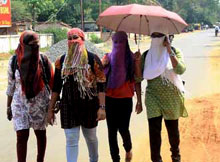