Built in 1956, Hirakud Dam in Odisha is the world’s longest earthen dam and Asia’s largest artificial lake. It is also one of the largest dams in the world, about 26 kilometers in length.

Hirakud Dam is built across the Mahanadi River, about 15 km from Sambalpur in the state of Odisha in India. Behind the dam extends a lake, Hirakud Reservoir, 55 km long. It is one of the first major multipurpose river valley projects started after India’s independence.

On 15 March 1946, Sir Howthrone Lewis, then the Governor of Orissa, laid the foundation stone of the Hirakud Dam. The dam was completed in 1953 and was formally inaugurated by Prime Minister Jawaharlal Nehru on 13 January 1957. The total cost of the project was Rs 100.02 crores (in 1957).

The main purpose of the Hirakud Dam was to check the massive floods that were affecting a large part of coastal Odisha. But, the construction of the dam greatly affected the natives of the western part of Odisha. Nearly 150,000 people were affected by the Hirakud project and nearly 22,000 families were displaced. 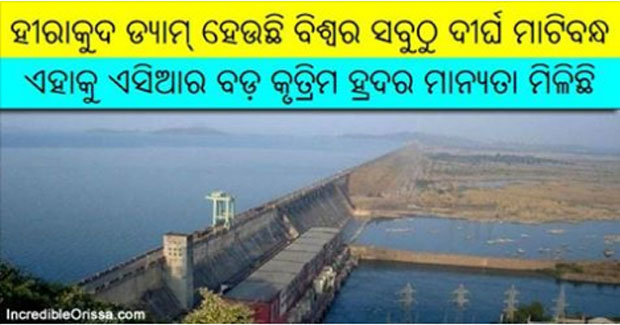