Prime Minister Narendra Modi, while addressing countrymen in his ‘Mann Ki Baat’ programme, advised sport lovers to attend the Odisha Men’s Hockey World Cup-2018 scheduled to be held at the Kalinga Stadium in Bhubaneswar from November 28 to December 16 and cheer the teams.

The PM also suggested them to explore Odisha during their visit to the state for witnessing the mega sporting event by visiting various tourist spots and holy places.

“Chief Minister @Naveen_Odisha thanks Prime Minister @narendramodi for highlighting #HWC2018 in #Bhubaneswar & the #Odisha’s rich culture & places of tourist attraction, in today’s #MannKiBaat. CM reiterates that entire Odisha is waiting to welcome the world,” said the CMO Odisha on its Twitter handle.

“Odisha has a dignified historical background and a very rich cultural tradition. People of the state are full of warmth. This is a chance for the sport lovers to see Odisha. They can visit the world famous holy places like the Sun Temple in Konark, Lord Jagannath Temple in Puri and Chilka Lake along with enjoying the games there,” he said. 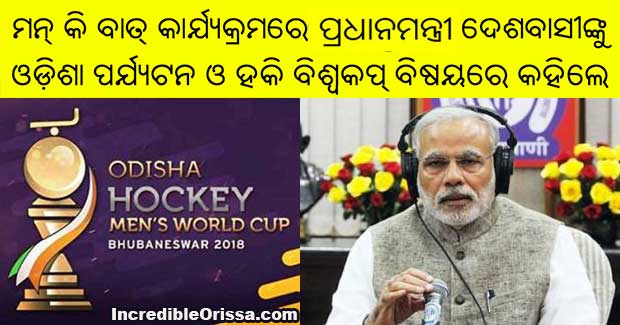