It is believed that Konark temple was built by King Narasimhadeva I who belonged to the Ganga dynasty that ruled Kalinga from the period of 1236 to 1264 AD. The name Konark is derived form the words Kona – Corner and Arka – Sun.

As the name suggests, the temple worships Surya (the Sun God). Shaped like a giant chariot, the temple is known for the exquisite stone carvings that cover the entire structure.

A major part of the structure is now in ruins. The temple is a UNESCO World Heritage Site.

The Sun Temple of Konark marks the highest point of achievement of Kalinga architecture depicting the grace, the joy and the rhythm of life all it’s wondrous variety. There is an endless wealth of decoration from minute pattterns in bas-relief done with a jeweller’s precision to boldly modelled free standing sculptures of exceptionally large size.

The monument was also called the Black Pagoda by European sailors. In contrast, the Jagannath Temple in Puri was called the White Pagoda. Both temples served as important landmarks for the sailors.

According to local legend, the temple has a great aura of power that comes from two very powerful magnets said to have been built into the tower – magnets that allowed the king’s throne to hover in mid-air.

The wheels of the temple are sundials which can be used to calculate time accurately to a minute including day and night.

The exact date and reason for the fall of Konark temple is still in mystery. History is almost silent about it. Scholars also differ in their opinions. The various speculations made as to the possible cause of the fall of this magnificent temple are given below.

The cause of collapse is also placed on Kalapahad who invaded Odisha in 1568.

In 1627, the then Raja of Khurda had removed the sun idol from Konark and moved it to the Jagannath temple in Puri.

James Fergusson (1808–1886) had the opinion that marshy foundation had caused the collapse. But, the structure has shown no sign of sinking into its foundation. Fergusson, who visited the temple in 1837, recorded a corner of the main sanctum still standing. It also fell down in 1848 due to a strong gale. 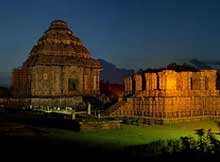 In 1929, an analysis of a moss covered rock estimated the date of abandonment at around 1573. Other proposed causes include lightning and earthquake.

In the last quarter of the 18th century, when worship had ceased in the temple, the Aruna Stambha was removed from the entrance of Konark temple and placed at the Singhadwara (Lion’s Gate) of the Jagannath temple in Puri.