Hrushikesh Bhoi will yet again play the role of demon King ‘Kansa’ in Bargarh Dhanuyatra this year.

Bargarh town will host the world’s biggest open-air theatre, for 11 days starting from December 26 and continue till January 5.

Hrushikesh Bhoi has been playing the role of Kansa in the Dhanuyatra festival since 2009.

A three-member selection committee selected Bhoi from among 24 aspirants including Gopal Sahu for the role after a screen test on Tuesday.

During the festival, the small town will be transformed into Mathura, the kingdom of Kansa. River Jeera will turn into the Yamuna. And Amapali, which is located on the outskirts of the town, will become the mythical land of Gopapura.

Kansa virtually rules Bargarh as part of the fair, which got the national festival status recently. 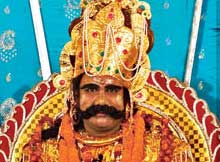 “I am really happy for being selected to play the role of Kansa again. I had given my best to be selected for this character,” said an elated Hrushikesh Bhoi, who is a native of Chicholi village under Ambabhona block of Bargarh district.

Artistes to enact other characters in the Yatra were also selected by the committee.