Odisha is bracing for a possible cyclonic storm once again.

The cyclone is brewing in the Bay of Bengal and is expected to hit northern Andhra Pradesh and south coastal Odisha by October 12, Met officials said.

The cyclone is likely to be named Hudhud, after an Afro-Eurasian bird, by Oman, whose turn it is to name the next cyclone.

The Odisha government today asked the collectors of 16 districts to stay on high alert as the low pressure has now taken the shape of a depression near the Andaman coast this morning.

“The government is fully prepared for the possible cyclonic storm,” Chief Minister Naveen Patnaik said on his return from New Delhi this afternoon.

Meanwhile, panic gripped people in coastal Odisha after the Indian Meteorological Department (IMD) indicated that the low pressure formed over Tenasserim Coast and adjoining Andaman Sea has concentrated into a depression which is located 1380 km south-east of Gopalpur this morning.

There would be rain/thundershower at one or two places over Odisha during next 24 hours, the bulletin predicted while making it clear that there would no immediate effect of the system on Odisha till the 9th of October. However, rainfall activity will gradually increase from the 10th of October along coastal Odisha, it said.

Distant Cautionary signal Number One (DC-I) has been hoisted at Paradip and Gopalpur Ports, it informed. However, there is still no clarity over the exact route the storm would take when it heads towards the coast.

In an order, the office of the Special Relief Commissioner (SRC) directed the collectors of Baleswar, Kendrapara, Bhadrak, Jagatsinghpur, Puri, Ganjam, Mayurbhanj, Jajpur, Cuttack, Khordha, Nayagarh, Gajapati, Dhenkanal, Keonjhar, Malkangiri and Koraput districts to remain on high alert in view of the possibility of a cyclonic storm hitting the Odisha coast.

The office of the Special Relief Commissioner (SRC) has also asked the Odisha Disaster Rapid Action Force (ODRAF) and fire brigade personnel to be prepared for relief and rescue operations in the districts that could be affected by the cyclone.

As cyclonic storm expected, panicky people in Odisha are thronging shops, convenience stores and vegetable markets in a desperate attempt to stock adequate quantities of essential commodities before the storm hits the landmass. 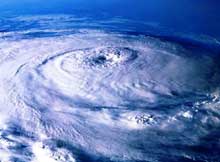 While the prices of vegetables have increased by about 50% in the last 12 hours, some essential items like candles have simply vanished from the shelves of shops.

With the disturbing memory of cyclonic storm Phailin that had hit the state last year on October 12 still fresh in their minds, people are unwilling to take any chances. Phailin had wrecked havoc in the coastal Odisha although there was minimal causality compared to the killer 1999 Super Cyclone.