100 years ago i.e. on January 2, 1918, the British government of India released an exotic banknote of Rs 2.5 or Rupees Two and Annas Eight or two and a half rupees. During British’s rule, one Indian rupee was divided into 16 annas.

As per the report published by Indian Express, the Rs. 2.5 note was printed in England on white, handmade paper and bore the emblem of Emperor George V and the signature of erstwhile British finance secretary M M S Gubbay.

The currency marked by seven prefix code variations denoting its circle — A (Cawnpore/Kanpur), B (Bombay), C (Calcutta), K (Karachi), L (Lahore), M (Madras) and R (Rangoon) — which was a vestige of earlier years when currency notes used to be legally encashable only within their circle areas.

The value of the currency (‘adhai rupya’) was stated at the back in eight Indian languages. Significantly, the value of Rs 2.5 was the exact equivalent $1 at the time. 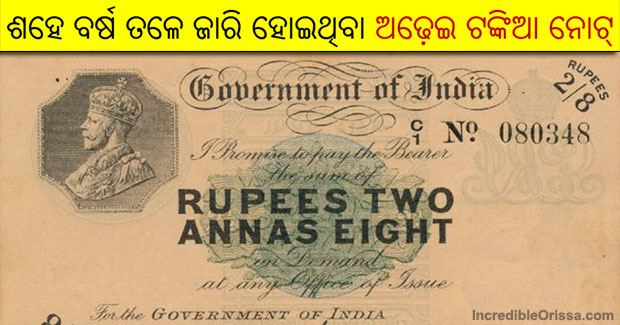